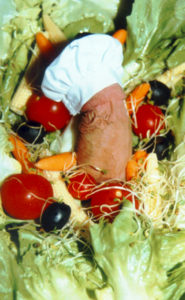 The idea for All About Dick came about some 20+ years ago. At the time it consisted of photos of dicks in costumes with complimentary backgrounds shot on film, pre-Viagra. It was fun but tedious. There were never quite enough quality images to create a book or even a worthwhile website so the idea just sat in the background. Occasionally it would rear its head as a reminder that it wanted someplace to live.

Sometime in the fall of 2015 the concept of an adult-only coloring book presented itself. It seemed like the perfect marriage using the simplicity of the line drawings and the social commentary through the penis.  It also seemed that the time has come for people to stop being so uptight about the penis.

For years men have exploited women and their bodies. Wasn’t it time to exploit the penis? We thought so. But a funny thing happened along the way. Exploiting the penis evolved into celebrating the penis.

The opportunity to create a gallery event opened the door to painting, sculpture and mixed media. Suddenly the Penis was Art and Art was the Penis.  One of the more controversial pages in the coloring book is Father Dick. 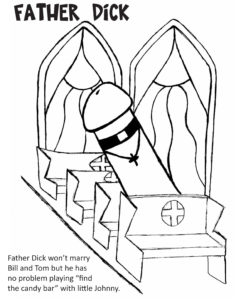 This is not meant with any disrespect to the Catholic Church but is a statement of the hypocrisy of those men who offended.

Interestingly, in the painting, without the copy, the image takes on other meaning. Priests have taken advantage of women and their positions – not just violating young boys. The intention is to create dialogue. Why are women not allowed positions of power in the Catholic Church? This is truly the original “Men’s Club”.

Most of the images are very tongue and cheek. Overall it is intended for humor but deeper issues seem to emerge. Society has such bizarre taboos about even talking about the penis. I am fascinated by the reactions and conversations when I talk about All About Dick. I intend to share those conversations in this blog. Stay tuned…