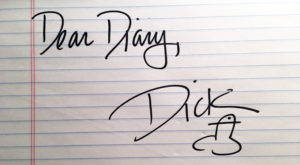 It’s not just a women thing.  Guys have it too.

I know I can have kids well into my sixties. And, in our society, it’s a lot easier or “more acceptable” for an older man with a younger woman. Usually because an older man has money and the woman just wants to be taken care of. Oh, don’t look at me like that… I didn’t make the rules.

But, there are guys like me who don’t have a lot of money. And, here I am, well into my fifties, I’m pretty set in my ways. (pause) I’m not gay. I just like doing what I want when I want. Probably the one thing that separates me from my other straight and married friends is that I’ve always enjoyed my own company. I paint, I surf, I read a lot… I can cook. I don’t mind cleaning. And, I like decorating. I like making things. NO! I’m not gay.

You know, I really kinda resent that so many people not only think that but will actually ask me… what the fuck?! Guys can’t like finding a great recipe or making something beautiful out of a piece of driftwood? “You’ve never married? Hmmmmmm.” I hate how they judge me. I hate when anyone judges people.  And, I hate when people live their lives according to someone else’s standards.

I never understood the nine-to-five, let’s climb to the top kind of mentality. I’m not very good with numbers and math, so there went my financial career. I like to build and fix things, but I’m not good doing it on your time and your style if I don’t agree with it. I like teaching surfing. Surfing is my zen… my religion. You must be present and completely mindful. And when you ride your first wave it’s better than losing your virginity. And pretty much any great or even good wave after that is like losing your virginity over and over again… that’s fucking awesome!

I get it. I’ve had relationships that have been beautiful. It’s really special having someone take care of you when you’re sick.  I know how nice it is to wake up with someone on a Sunday and spend a lazy morning in bed together – talking… drinking coffee… sex. It’s incredible.

But that initial feel good feeling leaves. Some people are able to evolve into something else. But most people just get tired or angry trying to relive the magic of the beginning. They fall into a routine… they co-exist without trying to upset the norm… they proceed as “expected” and think they are doing the right thing. That’s not living… at least not to me.