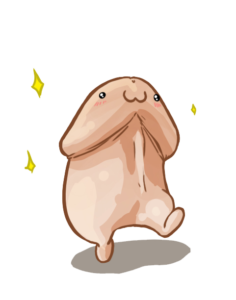 I have a small penis. How do I know? If the average is six inches, I’m only halfway there.

Who determines what is average? Are doctors required to report dick size? Is there a universal dick measurement system? Do you repot to the Department of Penis Statistics?

Is it true that black men have inordinately large members? I’ve seen some tootsie rolls out there. I’ve also seen a foot-long on white bread. But, let’s just say for arguments sake, that the average is six inches; approximately the same as an average banana or hot dog. The average girth is about 4 – 4.5” which is what separates a hot dog from a cucumber.

I have the dick of an average 4-year old. Why does that matter so much? I know many guys who are more than average in length and girth. They know how to fuck but do they know how to pleasure a partner? How many men actually know how to properly suck a pussy? Most men just sorta spit and wiggle their tongue to make sure it’s wet enough to penetrate with least resistance. But a true connoisseur can slowly and deliberately bite, suck, nibble, tickle and squeeze … allowing the sensations to build into an explosion of ecstasy – sometimes, several times. Sometimes even getting her to ejaculate or squirt.

I am not just my penis. I have a tongue, lips, teeth and fingers which can also serve as a fist. What is the average size of a vagina? The average depth? I mean, if they’re holding a used car auction in there, you’re probably not going to be happy with anything smaller than a subway train.

When I mount a woman from behind and stick my tiny prick in her ass, she moans with pleasure, as do I. My hands pinch her nipples, hard, as I bite her shoulder. One hand moves slowly down her soft belly. I gently tug on her pubic hair. I roll her clitoris between my thumb and forefinger as I continue to thrust – first lightly, then harder. My small cock sits tight in her ass. The tingling sensation sparks from every nerve cell. There is no pain, only pure, raw pleasure as an explosion of light bursts behind closed eye. Our bodies become one in that moment of complete surrender.

So, to all of those big-dick-slinging bastards, I salute you. But, if you want true pleasure, more than just a fuck, find yourself a little dick. We’re great lovers because we have to be. And, you know what they say… once you go tiny, you’ll love it in the hiney.